1.  A quick rundown of everyone packing:

-OC really needs to step up their closet game, but I guess that will come when the Debrow Manse is all set up and ready.

-I’m glad Heather has that assistant in her life to make her think she’s funny.  Heather is sharp as a tack, a seemingly great mom, a good friend, and a lover of champs, but she is no comedian and I think whatsherface, the assistant, exists solely to let Heather think she’s still on a sitcom somewhere.

-I know there’s a lot of bad press about Vicki’s current man, but Briana approves which is good enough for me.  The second Briana says she’s not into it anymore, I will follow.  Blindly.  Because Briana is my ride-or-die.

-The more Kelly berates her husband, the more I’m on his side.

-Was JimmyE being nice and sweet to Meghan on the phone?  What’s going on?  Is he being coached on “how to not look like a douchenozzle every moment you’re on screen”?

-I take back what I said earlier in the season about Eddie having no interest in Tamra.  He seemed very into her in this scene, although she was also just about to leave on a trip so maybe he’s just stoked to have the house to himself.

-I like Mia as a character on this show but telling Tamra not to drink is a huge mistake from the viewer’s perspective.

-I cannot imagine going to Ireland and having to stay sober.  I can also not imagine getting on a plane in the first trimester of a pregnancy.   But I was exorcist level vomiting 100% of the time and never once uttered the phrase “I had a bit of nausea today”.  It was more like “get the fuck out of my face I hate all of you this baby is gonna pay for his crimes someday”

2. Holy offensive, batman! Oh, Kelly. Oh, crazy, cuckoo bananas Kelly.  Here’s the problem with people like Kelly leaving the country and representing Americans abroad- she seems to be under the impression that everyone she meets is an Epcot worker put there for her own amusement.  Otherwise, how can you explain her literally uttering the phase “oh, me lucky charms” to the concierge of a fancy Irish hotel? Her jokes aren’t just BAD, there’s also SO MANY OF THEM.  Manfriend and I were talking a few months back about our different joke styles at parties and he was saying that he’s like a sniper.  He stays really quiet until he knows he’s got a good one and then he shoots it out there.  I, on the other hand, carpet bomb the room.  I say every remotely funny thing I can think of and hope one lands.  I fear that I am A Kelly in this way.  But even I know not to mock someone’s accent when you’re in a foreign country (or in general).  Also- did you see Meghan’s face when Kelly jumped at the chance to share a suite with her?  I like how Kelly had been Vicki’s main squeeze all season until the shot at a baller room comes up and then we’re reminded that Kelly is supposed to be Meghan’s friend.

3. So I have a theory on why everyone seems to feel so comfortable with being offensive (I’m lookin at you, SparkleTop Beador). When the women have gone to other countries in the past, they were presented with such a different culture that they knew it would be offensive to mock or imitate the local customs. But Irish people are mostly white.  They speak the language.  And some of these women are of Irish descent, so they seem to think it’s okay.  I get that it was all in fun, but it still makes me cringe to see these grown women river dancing in the streets and blabbing loudly about wanting to find a leprechaun.  Side note- I am desperate to go to Ireland.  My crazy sister does this thing where she religiously searches for amazing plane deals and then jets off to Europe for a weekend.  Dublin was the first place she went after getting her passport and I gave her mega shit for it at the time (who goes to Europe for less than 72 hours including plane flights?!) but secretly, I’m jealous.  She just got back from seeing the Harry Potter stage play in London and she went to Milan with her boyfriend a few months ago.  I seriously have no idea how she’s affording this, even with good plane ticket deals.  Do you think she might be a drug dealer?  Fuck.  I should call mom.

4. I want to give Meghan shit for this genealogy storyline (especially since it was the weirdest excuse ever for going on a cast trip) but the truth is, I find it fascinating and I totally went on ancestry.com when I was pregnant. Her dopey excited face is grating, but I would be stoked to hear that I’m in a town full of relatives I never knew. I’m a family history dork.  Back at the bar, Vicki is molesting a married man.  It’s…..gross.  If the roles were reversed with the bartender being a woman and Vicki being a “Victor”, this behavior would be tantamount to assault. That said, “I’m drunk and he’s cute” is definitely going to be the title of my first book all about my late teens and early 20s.  Preorder your copy now on Amazon.

5. Kelly Dodd is an aggressive and angry drunk. She needs help.  According to twitter she’s at a detox center although the legit places don’t let you go on social media, so who knows.  The flick of the face thing is fucking annoying as hell, but here’s the real problem:  You can’t keep defending your behavior as “a joke” when people have asked you to stop it, which they all did- repeatedly.  Personal rant time: Manfriend isn’t allowed to be in the house when the Gilmore Girls revival comes on in November because he thinks it’s really funny to mock the show, and while the mocking is annoying, that isn’t even the issue; it’s that I’ve repeatedly told him I hate it when he does that.  But he seems to be unable to help himself which is why he’s being exiled on November 25th, 2016.  The other issue here is that Kelly takes it to a 10 with the aggression every single time she’s wasted.  It’s very Farrah Abraham-esque

6. You guys? This is why you only take a shot or two at the first bar in a pub crawl and then move on. If you drink like a fish at Pub1, Pub2 will be the last pub in your crawl.  So, let’s break down this scene:

– Oh Kelly, being Mexican does not make you immune to being racist.  Now, there’s some disagreement via twitter and the blogs over whether making broad generalizations about people of a certain faith can be considered “racism”, but I’m inclined to say that it is, especially after a quick glance at the “racial anti-Semitism” wiki page (see!  I do research!).  Here’s a quote from the article I read:

“The logic of racial anti-Semitism was extended in Nazi Germany, where racial anti-Semitic laws were enshrined into law, which looked at the “blood” or ethnicity of a person, and not their current religious affiliations, and their fate would be determined purely on that basis. When added to its views on the Jewish racial traits which the Nazi pseudoscience devised, led to the Holocaust as a way of eradicating conjured up “Jewish traits” from the world.” – https://en.wikipedia.org/wiki/Racial_antisemitism

When you look at it from that perspective, then I am going to agree.  Now, some other people might argue that Kelly was only saying positive stereotypes, but she was using them in a negative way against Heather, so again I think it can be classified as racism.  It would be like telling a Chinese man that you’re shocked he is bad at math and doesn’t play the violin.

That said, Heather is not funny

– Vicki was right to stay out of it but probably should have diffused the situation sooner.

7. Kelly Dodd can fuck right off. I’ve tried to play devil’s advocate with her more than a few times this season because at least she is bringing something (read: complete insanity) to the table. But in what universe would you think that saying “no wonder her daughter doesn’t talk to her” is ever okay, even to your worst enemy?  And no, Kelly- NO ONE wants to hear your side of the story because we all just saw your side and your side is utter garbage.  At no point and time did you handle yourself with anything that could possibly resemble human decency.  At this point, she really ought to run for president.  I will say though, that I love how pissed off Heather is for being asked to leave a department store.  That may very well be the worst thing to ever happen to Heather Dubrow.  Will any of the ladies film with Kelly if she’s asked back?  I don’t see how or why they would, unless Bravo cuts some serious checks.  Oh and lastly?  Blah blah blah Tamra shouldn’t have hit Kelly blah blah blah except I can’t even say that with any sincerity because I would have decked her.  Kelly seems to have been hanging out with Vicki too long because she does not understand that when you attack someone, if they come back at you and people rightfully side with them that does not make you the victim.  Leeanne Locken of RHOD was notorious for this.

8. Kelly’s attempt to defend herself to MKE was…..well, I think Meghan summed it up pretty well here: 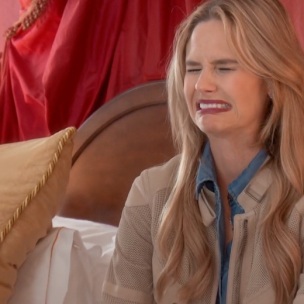 Here’s the thing, Kelly.  If you do something horrible, and everyone around you admonishes you for it, that’s not you “being ganged up on”.  That’s just people checking your bullshit.  And Tamra was right when she talked about how she’d been trying to stick up for Kelly and see the good in her, although part of me thinks that was because Tamra is a Real Housewife of Bravo Production.  Not in the literal sense, i.e. she doesn’t have a credit for it, but Tamra is like RHONY’s Dorinda in that she knows what needs to happen to make a good show.  Tamra knew that keeping Kelly in the mix would be good for ratings, but that move bit her in the ass this time.  MKE is similar in this way because no one in their right mind would advise Kelly to go to dinner with the rest of the women after that debacle.  But MKE wants good ratings for her Ireland trip so she tries her damnedest to get KellsBells to show up, with no luck.

9. None of the women ordered potatoes with dinner. That’s basically an Irish hate-crime, right? Also- was that a tourist bar?  Or do all Irish pubs put on big shows like that?  Is Johnny Fox’s the Andeles of Ireland?

10. Heather Dubrow perfectly sums up how I feel whenever I see older drunk white women dancing in bars with this look: 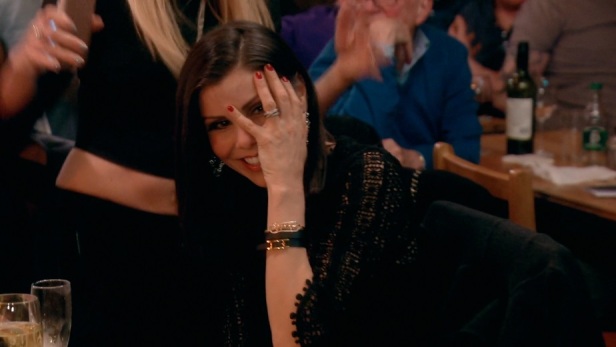 I want to look away but I just can’t.

I look forward to next week when Kelly drunkenly yells at Shannon for being a drunk.  Also, in case you missed it:

2 thoughts on “Liz’s #10thoughts on #RHOC – The Humorless Jew, and other racist remarks….”