We kick things off with Yolanda and her bearded ginger make up artist getting ready for her Lyme NYC event.  Yo tells GingerBeard that she hasn’t worn makeup in 11 months or spoken in front of a crowd in three years.  But Yolanda doesn’t experience time in the same way that you or I do though, so that could mean 11 hours or 3 minutes.

Erika has one of her glam squad teams with her (two folks awesomely named Laurentius & Priscilla) in NYC and after Priscilla declares that Erika is “perfect”, they take a few sex-kitten pictures which Kyle walks in on. 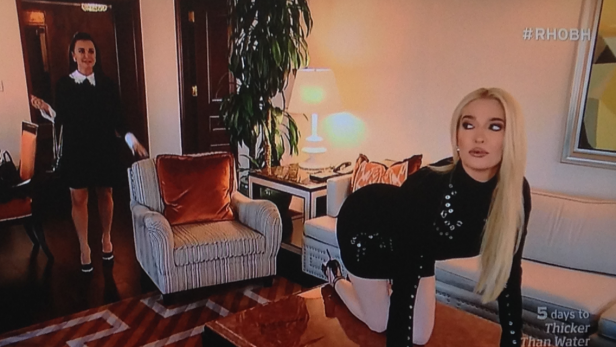 Kyle and Kathryn are excited about how grand the event is.  It’s a full on NYC gala and the venue is gorgeous.  I get super excited when I see Ally Hilfiger get on stage because she was the costar of one of MTV’s best 2000’s reality shows, Rich Girls.  Has Lyme’s Disease officially become a Celebrity Disease, like “exhaustion” or “sex addiction”? 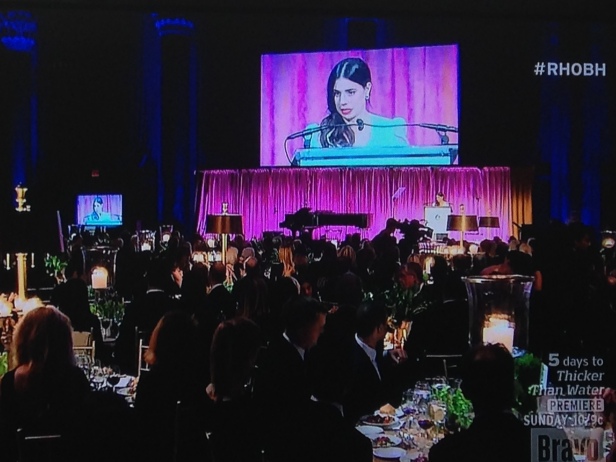 Kyle feels super guilty listening to the speakers talk about how their friends and family would doubt if they were even sick and she regrets not standing up for Yolanda more when Lisa Rinna talked to her about the Munchhausen theory.  Kyle also feels shitty for ever talking about Yo’s kids and whether they have Lyme’s or not. 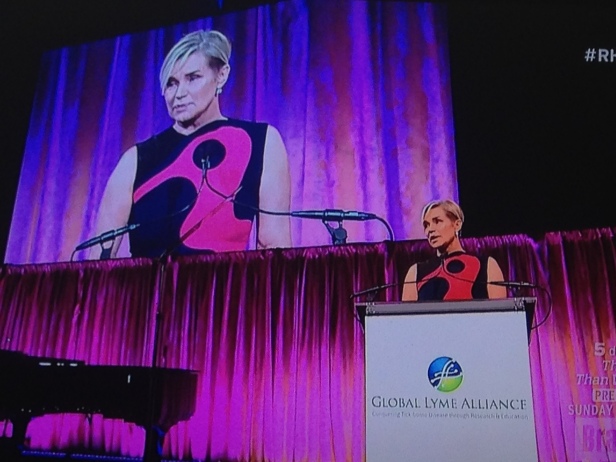 Gigi gives her mom’s introduction speech and it even gets me choked up a bit. Gigi’s voice cracks as she talks about how her mom is a symbol of hope for Lyme’s Disease awareness.  Yolanda thanks everyone who has supported her, including her husband for being with her on the “unromantic journey”.  It’s kind of a bummer knowing what we know now about their separation.  Erika wishes that Rinna had come to the event and heard what the other speakers said.  I agree.  It moved me, and I’m a heartless bitch.  Plus, Ally Hilfiger!!!

Kyle, in classic Kyle fashion, turns the conversation at the table to her feelings and how upset all of this has made her.  Erika is stone faced and annoyed that it took this huge event for Kyle to figure out that talking about Yo’s illness like it might not be real is disgusting.  Kathryn (whose loyalties I just can’t figure out) says that its not just Lisa Rinna who is spreading these rumors, but LVP as well.  Yolanda is deeply touched by how all of this has effected Kyle, who by the way is dressed like a school marm/pilgrim. 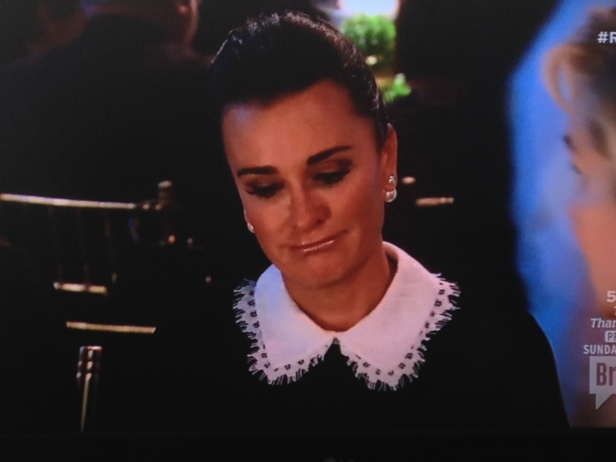 LVP just got back from a three day trip to London to renew her passport and randomly, as a reward to Max for holding down his food running job at SUR, she BUYS HIM A FREAKING BLACK JEEP (like the one Chelsea from Teen Mom 2 has that I was coveting, but way nicer).  LVP says that her parents never told her that they loved her, so she makes an effort to not treat her children the same way.  I mean, my mom tells me she loves me all the time, but she never bought me a jeep just for showing up every day to my waitressing job.  If I didn’t have a baby and was single, I would make it my life’s mission to move to LA, make Max fall in love with me, and get myself into the Vanderpump family.

We get to watch Lisa Rinna pack her suitcase and it’s just so low rent for this show.  She’s got her suitcase on her bed in her bedroom instead of in a fabulous closet/changing room, and there is no Hispanic maid there to help her or bring her tea.   The whole thing is just depressingly normal. 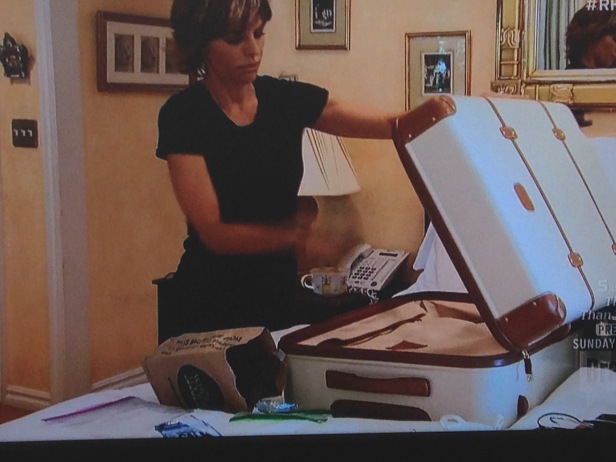 Eileen, who looks great in a pair of jeans btw, tells Vince that cursing isn’t allow in Dubai, so literally all of these women are going to get arrested.  And on that note, the ladies tell us who their preferred cellmate would be if that were to happen:

Lisa Rinna picks Eileen, Kyle wants LVP, LVP wants Rinna because she’s so skinny and could slip through the bars, Eileen picks Kathryn (because of her giant man hands and ability to beat people up), Erika interestingly chooses LVP, and Rinna changes her vote to Erika because her husband is a lawyer and he would be the most useful.  (I pick LVP, because being locked in a room with her is on my list of Perfect Day scenarios.)

Both Eileen and Rinna are concerned about their men running the households while the ladies are gone and Harry calls Rinna out on this as being pretty sexist.  Personal story time: I was telling my son’s pediatrician about how I would be returning to work soon and that The Boyfriend will be taking over as a stay at home dad and she asked if he would be needing a crash course or if he has been pretty involved already.  I told her that he’s been great and I’m not worried at all but then she told me to make sure he doesn’t give the baby too much “screen time” because she said that men in particular are bad about letting babies or kids watch too much tv.  Cut to my mental montage of the countless hours I’ve spent with the baby in my lap while I’m watching reality tv.  I assured her I would pass along the message.

We get a much better “packing for the trip” scene with Erika and her glam squad (all gay men with all the same facial hair) and we are introduced to Erika’s “look book” where she has all of her outfits already mapped out.  It’s similar to the computer program “Mis-Match” that Cher has in the movie Clueless that I’ve always wanted.  The entire squad is coming with Erika and she has neglected to tell the rest of the girls about this. At the airport, Erika is dressed in a sweatshirt and workout pants because she always goes casual for flights.  Eileen is wearing overalls, because she always goes farmer for flights. 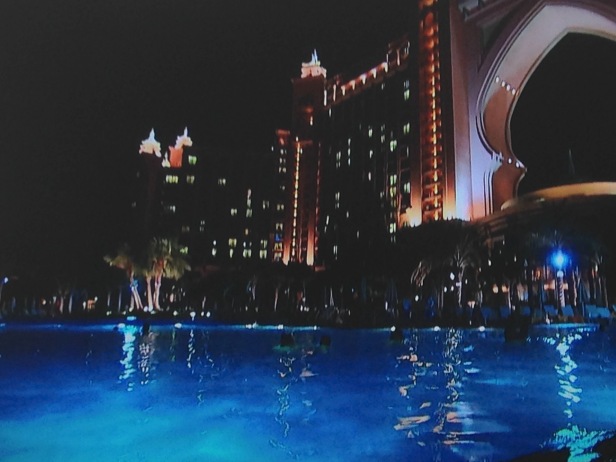 The hotel is RIDIC.  Kyle and LVP’s suite alone is almost 10,000 square feet and rents for $40,000 a night.  Who is footing this bill?!  You know Bravo isn’t dishing out that kind of dough, and I know The Agency is super successful, but DAMN. 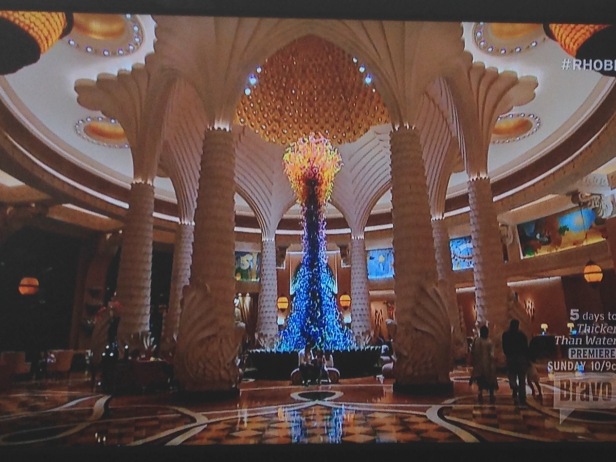 The infamous Brandi Glanville finally makes her long awaited (not really) cameo for this season by showing up to help Yolanda pack.  Side note: Yolanda and David’s Malibu house finally sold for almost $20m.  Yo says that she will miss all of the memories the house holds for her, but I will miss the glass refrigerator most of all.  Yolanda says that Brandi has been a very consistent friend who has been supportive and real with her. 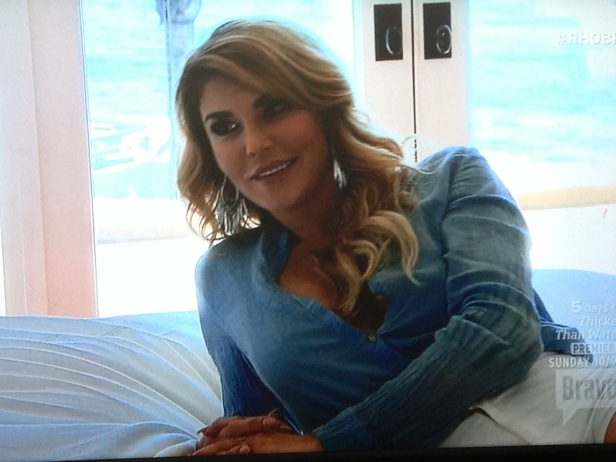 Brandi asks Yolanda how she and David are doing and Yo gives her stump speech about how “it’s a challenge” but that they are working through it.  Brandi jokes about how Lisa Rinna wears a wig, which I googled but nothing really came up.  Yolanda tells Brandi that Rinna has been telling people that Yo has Munchhausen’s, which isn’t really true, but she gets the reaction she wanted out of Brandi (shock, anger, etc).

Back in Dubai, we see all the suites that the women are staying in and I’m blown away.  Hands down- these are the nicest accommodations of any housewives trip ever.  Eileen is staying in what is basically my dream room. The walls are glass and part of the giant fish tank in the hotel.  I’m obsessed with fish tanks but I’m not allowed to have them anymore because my fish always die and The Boyfriend is tired of the heartbreak. 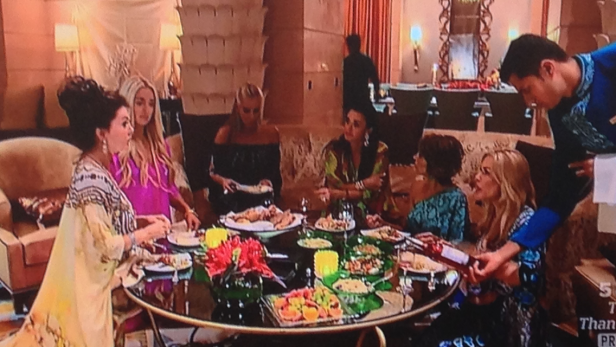 All the women get together and after a few minutes of pleasantries about the proper pronunciation of “hummus”, they get into it about Yolanda’s NYC Lyme event.  Erika says that she wishes Rinna had been there because it could have answered some of her questions.  Rinna countersv that she has never doubted that Yolanda is actually sick (not sure that I believe that) but that she feels that Yolanda uses her illness as an excuse for things sometimes, and Rinna is probably right about that but it’s not much of a thing to say about someone who is supposed to be your friend.  Rinna admits that it’s not any of her business but she still has “strong opinions”.  Erika defends Yolanda and says that she thinks Yo is doing everything she can.  Erika asks why would Yolanda want to miss this incredible trip or not get to see Bella and Gigi in NY Fashion week? Fair point. 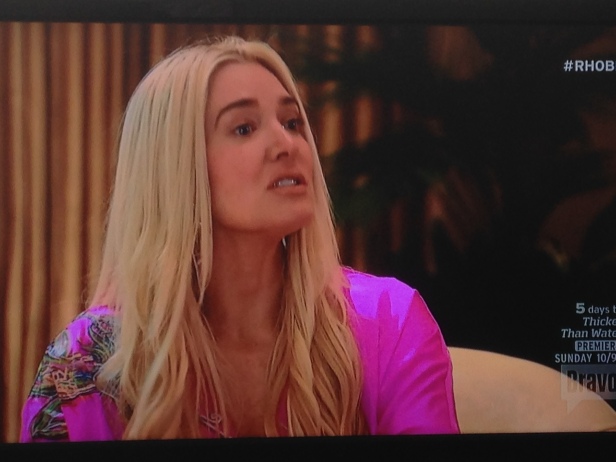 Eileen says that she doesnt understand why all of this is still an issue for Rinna and I agree, but I also know that this is Rinna’s one big story line this season, so she’s got to see it through.  Rinna is still pissed about the fact that Yolanda hung out with Brandi and Kim and it’s so obvious that the only reason that bugged her was because she hates Brandi and Kim.  UGH.  This whole season is just recycled drama after recycled bullshit.  No one should care this much about the shit these women are bitching about. 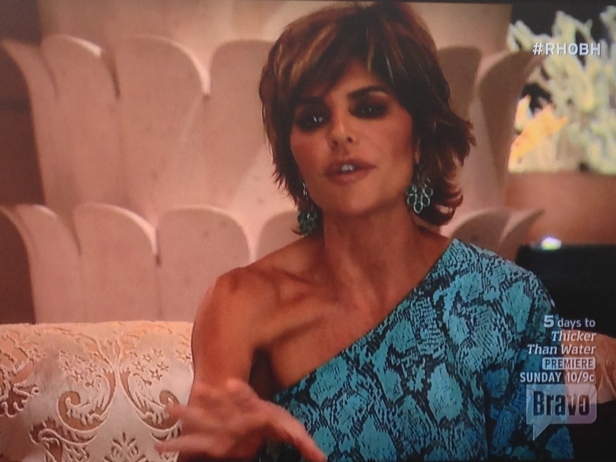 Erika reminds Rinna that it was ERIKA’s dinner in the first place and if she is okay with Yolanda  missing it, then Rinna should be too.  Rinna, masterfully I might add, switches gears and asks Erika how she felt about that dinner in general- cue an appropriately nervous look from Kathryn.  Unfortunately, the whole conversation gets settled pretty quickly though, so no drama to be had there, which is disappointing to me because that’s an ACTUAL fucked up thing that happened during this season.  I would much rather see everyone take Kathryn to task for her horrible behavior than to rehash Eileens nonsense with LVP or Rinna’s bizarre ownership of how Yolanda handles her social calendar.

Anyhow, that ends this episode.  Again I say that this season has been a real snooze.  Fire Kathryn and Eileen, bring back someone interesting like Carlton or I’d even take Adrienne back.  Anything to move past these tired plots.