I am both very excited, and clinically depressed about PumpRules Reunion Part 1 because a- reunion shows on Bravo are the shit, and b- that means we are so close to not having Vanderpump Rules show up on our DVRs.  Yes, Southern Charm is coming soon and that should quench our thirsts a bit, but its like Say Yes To The Dress: Atlanta….good for a fix, but we all know that Monty is the Poor Man’s Randy.

First things first, Lala’s makeup is a crime.  Who did that to her?!  I know she wears a lot of makeup usually, but DAMN.  Also, for the first time ever, I do not approve of what LVP is wearing, definitely a bizarre Head Mistressy thing.

Katie and Tom2 still havent had sex.  Still.  Why. Are. These. Two. Getting. Married. 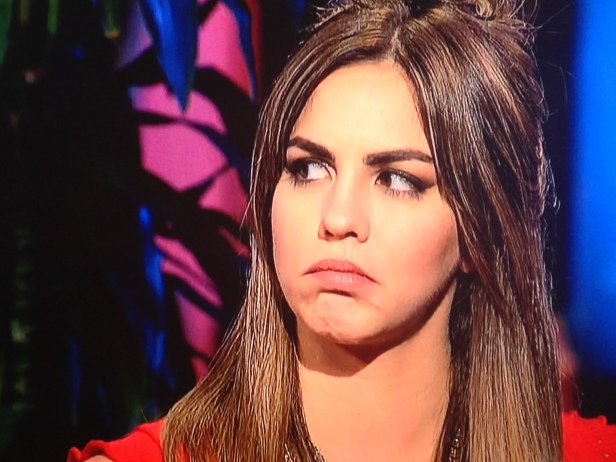 James got drunk at Pump again so he is suspended.  Also- I bought PumpSessions and it arrived yesterday.  I listened to it in my car and it was fine, but I think I need to sit outside and get drunk on mimosas to really feel the full effects of the James Kennedy Experience.

So as it stands- Jax still hates James, but James doesnt hate Jax.  I believe this 100%, because I think James is a guy that lobbied and plotted to get on a tv show.  I think his mom got him the job at SUR to get him on the show, I think he befriended Tom1 thinking that was his way in but then saw an opportunity to fuck/date Kristen and went for that as his big break and he’s acted accordingly ever since.  James has inserted himself more and more and more into the group and the show.  It’s all very calculated.  Jax, on the other hand, is just a dude who found himself on a reality tv show.  After watching the Uncensored episode last week, my guess would be that Stassi was one of the first people cast (because she’s perfect for reality tv) and the fact that she was dating Jax was a major reason why he was cast as well.

Jax blabs on and on about how James is so lucky that he is on probation because if he weren’t, he would beat the shit out of James.  This is stupid and here’s why:  James is absolutely the type of guy who would call the cops if he got beat up (and I don’t blame him for that), so Jax would go to jail either way even if he wasn’t on probation.  Is Jax just hoping for a reduced sentence and  judge who watches the show once he’s off probation?

We start the season recap conversation with Scheana’s decades party.  Kristen, of course, has no problem crashing any event and since it’s never actually been a problem for her, I don’t blame her for it.  We get reminded of James’ ridiculous behavior that night (i.e. downing fireball “whhhaaaaaaaaa??!!”).  I appreciate LVP’s distaste for the phrase “boning”; me too, my love. 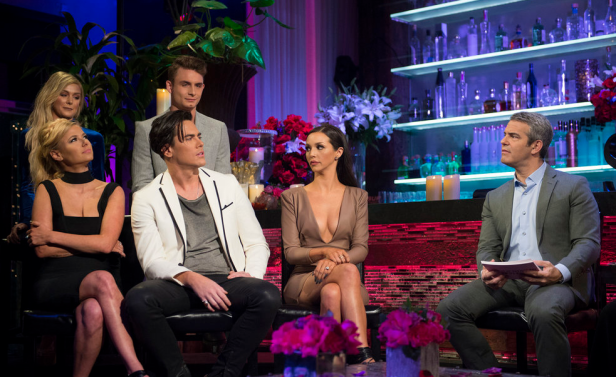 Anyhow, most of this is all par for the course, but then Tom1 jumps in in defense of James (which is, by the way, my favorite odd couple friendship in this show) and says that as more time goes by since he and Kristen broke up, Tom1 finds out about more and more people that Kristen cheated on him with.  Look, we here at 10Thoughts are big fans of K-funk and have been for a while, but I always wish she would own her bad behavior a bit more.  She’s kind of a shitty girlfriend.  And we see evidence of this constantly (read: definitely boning James on her car while dating her current boyfriend Carter), so I really don’t get why she thinks she gets to be on some high horse when it comes to fidelity.

Full disclosure, I used to be a cheater.  I was pretty bad about it, frankly, and I think that like Kristen, it all stemmed from  desperate need for attention as well as basic low self esteem.  But the key phrase here is “used to be”, because people absolutely can change, and I hope that someday our sweet K-funk will end that crappy chapter of her life so that she can seem slightly less hypocritical every time she talks shit about other people.  In other words, whore bags should not throw whore stones in their bag houses.

The group actually addresses what I said earlier!  Jax and Kristen agree with me and think that all of James’ moves were calculated, while LVP and Tom are less convinced.

Moving on, everyone bitches about how Lala lied about her modeling trip to Italy.  Because no one else on that stage has ever played hooky from work, ever.  Lala just had a bad lie?  I guess?  Both Lala and Jax admit to flirtatious nonsense but there is no great love story there.  Also- Jax looks like a French pirate and I am not into it.  Katie and Lala get pissy with each other and I think it’s no secret whose team I’m on with this one.  Katie is a bitter waitress/beauty blogger who hasn’t had sex in a year whereas Lala is a gorgeous (when she hasn’t had her head dunked in a paint bucket like tonight), confident woman who you just KNOW would make Tom2 much happier (if he were actually into women, that is).

Shay joins the crew on the stage in his first reunion appearance and tells Andy that at his worst, he was taking about 5 Vicodin a day.  I guess that’s a lot?  I can’t take narcotics at all because they make me puke so it’s hard for me to know how bad that is (seriously, I refused anything heavier than Motrin after my c-section because I can’t handle any of the stuff).  Everyone in the group says that they had no idea that Shay had a problem and honestly, I’m not sure I believe that this problem was as bad as Scheana made it out to be.  LVP gets pissy with Shay because she loves Scheana so much and it’s the one and only thing that I really don’t like or understand about LVP.

Jax claims to have not known about Shay being on pills and thought the problem was all about drinking but apparently Scheana told him that the issue was bigger than that.  My boyfriend, who is half passed out on the couch and very rarely watches this show, comments that Jax wasn’t paying attention to what Scheana said because “it didn’t involve him”. Proving that even the most casual of PumpRules viewers know that Jax is a dick.  Also, Andy calls Jax a “colander” and Jax has clearly never made pasta and doesn’t know what a colander is.

Tom1 says that he has served Scheana and Shay the exact same amount of drinks but if they got into a fight she would blame Shay for being drunk.  Scheana tries to say that it’s not just her who thinks Shay is drunk and Andy redirects her and says that Tom1 is saying that Scheana uses Shay’s “addiction” to talk down to him. YEEEEEEEEEEEEEESSSSSSSSSSSSSS.  This is what I have been saying all season and have been furious with her about. Scheana either wanted SoberShay or PartyShay depending entirely on how it suited her at the time.  Fuck.  I hate Scheana.  LVP, of course, stands up for Scheana and I am going to try really hard to ignore it.  Shay quit pills cold turkey and I really want to believe this whole story line because addiction is a very serious thing but a lot of this rings false for me.  And normally, I would say that it’s none of my business, but it’s on my TV and I write a reality TV recap blog, so Scheana literally made it my business.

Lala apologizes for anything she said that may have been hurtful about Scheana and Shay’s marriage and how his addiction was handled.  Even after being prompted by Andy, LVP refuses to apologize because she is LVP and this is her show.

Ariana talks about her birthday and I’m with LVP that Tom1 and the boys going to Vegas was ridiculous.  All of these men are over 30 and I’m all for
“boys trips” or whatever, but not when three of the four guys (and maybe all four but we don’t know what Peter’s really done) have cheated on girlfriends in Vegas.  Not that that was Ariana’s issue, but it should have definitely been Katie’s issue.  Tom1 stopped his tattoo laser removal treatments. Because they hurt like hell.  I do not blame him.

Side note- everyone but Andy and LVP admit to having hooked up with girls.  I’m not sure I believe it with LVP, though. 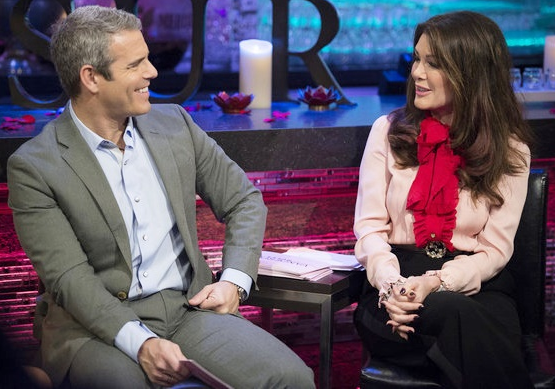 Andy moves the topic to Kristen’s apology to Ariana and James immediately jumps on the “it was bullshit” bandwagon. I kinda think it was too.  Yes, Kristen needed to apologize because she was a psycho, but she also knew that the group was going to Hawaii and she wanted to go.

And then we get into a shouty Your Friends My Friends fight between Tom1 and Kristen.  Andy asks what Tom1 has to do to be “at peace” with Kristen and Tom1 says that he IS “at peace”.  And again, I say that you can be “over” a situation but still not want to spend time with the people involved.

Lala and Kristen start to get into it but then it quickly turns into a fight between Ariana & Tom1 v. K-funk.  LVP scolds Ariana for cursing and it bugs me.  Tom1 reminds Kristen that she tried to break up Tom2Kat and she pulls a “DON’T YOU DARE”, but it’s really completely valid because she totally did.

James plays Nostradamus and tells Katie that he can’t wait for Kristen to inevitably fuck her over.  And I’d try to defend K-funk on this one, but she did fuck Jax.  Twice.  So…..

Anyhow, can’t wait until next week when Stassi joins her rightful place among the PumpRules crew.